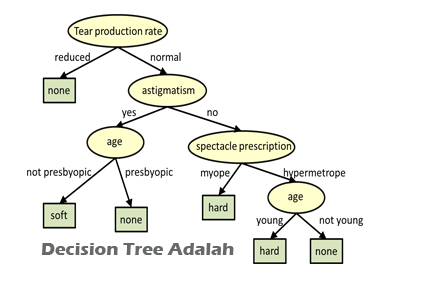 Breiman et al. (1984) stated that this method is a very popular method to use because the results of the model formed are easy to understand. It is named a decision tree because the rules are similar to the shape of a tree. Trees are formed from the binary recursive sorting process in the data group so that the value of the response variable in each data group makes the sorting results more homogeneous.

Another name for a decision tree is CART (Classification and Regression Tree). This method is a combination of two tree species, a classification tree, and a regression tree. For the sake of simplicity.

1. Roots
The root is the top node, there is no input at this node and there is no output or it can have more than one output.

2. Internal Node
Internal nodes are branch nodes, there are only one input and at least two outputs at this node.

3. Leaves
A leaf is the end node or terminal node, there are only one input and no output (end node) at this node.

1. Tree construction begins with the formation of roots (located at the top). Then the data is broken down using attributes that are suitable for use as sheets.

2. Tree pruning, which is identifying and removing unnecessary branches on an already formed tree. This is because the decision tree can be large, so it can be simplified by pruning based on the trust value (level of confidence). In addition to reducing tree size, tree planting is also carried out to reduce the rate of prediction errors in new cases from the results of splits and solutions.

3. Formation of decision rules, namely making decision rules from the trees that have been formed. The rule can be in the form of an if-then which extends from the decision tree by tracing from the root to the leaf. For each node and branch, if specified, sheet values ​​are entered. After all the rules have been created, they can be simplified or combined.

The decision tree is the most popular classification model because it can be easily interpreted by humans. Many algorithms can be used to build decision trees such as ID3, C4.5, CART, and GUIDE.

The decision tree is also useful for exploring data, finding hidden relationships between some candidate input variables and a target variable. The decision tree combines data exploration and modeling which makes it an excellent first step in the modeling process even when used as the final model for some other techniques.

In some applications, the accuracy of classification or prediction is the only thing that is highlighted in this method. For example, direct mail companies create accurate models to predict which members could potentially respond to requests regardless of how or why the model works.

Another advantage of this method is that it can eliminate unnecessary calculations or data. Because existing samples are usually only tested based on certain criteria or classes.

Although it has many advantages, it does not mean that this method has no drawbacks. These decision trees may overlap, especially if the classes and criteria are used very frequently to increase the decision time according to the required memory capacity.

Strengths and Weaknesses of the Decision Tree

Pros of the Decision Tree:

Weaknesses of the Decision Tree:

Application of the Decision Tree

The use of the decision tree is generally in operations research, especially in decision analysis. The purpose of using a decision tree is to identify the strategies most likely to achieve the goal and is a popular tool in machine learning.

Indecision analysis, decision trees, and related diagrams are used as visual and analytical decision support tools, where the expected value or utility of the alternatives is calculated.