How Do You Handle an Aggressive Cat? And some other Cat questions - Mangihin.com

How Do You Handle an Aggressive Cat?

I am a single guy, and the only person who “loves” me is a big black tomcat who I took in when someone ran off and abandoned him. I have him up to 20 pounds now, and he sleeps at the foot of my bed.

My question: I was sitting on the side of my bed with my two legs uncovered when Mr. Cat came up and tried to bite each leg. Was this a sign of love or power?

This activity is often a mixed bag of predatory and playful behavior. Sometimes it’s hard to tell which. Ankle stalking is a very common form of play among cats, and some, especially if they are feral or have been abandoned, are more prone to biting. Mona Lisa, a stray I adopted recently, had this nasty habit of flinging herself, teeth exposed, claws extended, onto our ankles first thing every morning—before we had our coffee. A loud “no!” followed by walking away (without greeting her and without petting) broke her of the habit. We distanced ourselves whenever she acted badly. Because she craves affection and company, she chose to give up the attacks rather than lose her special moments with us.

Always discourage biting by cats and dogs, including playful biting by kittens and puppies.

Cats display body language that tells you how they are feeling. An arched back, hair standing on end, or ears low on the head are all easy-to-recognize visual cues that tell you the cat is in a bad mood and might be about to act out if he has a history of aggressive behavior.

Really serious, sudden, violent attacks often get worse, and are sometimes related to medical problems. If your cat’s attacks seem to be on this level, take him promptly to your veterinarian for a checkup. If everything checks out medically, try out some of the suggestions below.

First, make sure you always discourage biting by cats(and dogs)—including playful biting by youngsters. It’s not unusual, of course, for a cat to want to bite and chew. My three cats like nothing better than to pounce on a toy, locking their jaws on it and giving it a good thrashing. It’s natural, part of their hunting instincts. So, have plenty of toys around the house to help satisfy that urge. 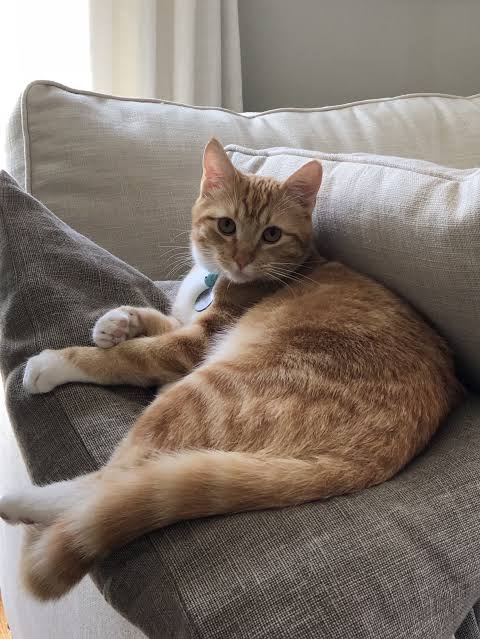 Mona Lisa chose to give up the attacks rather than lose her special moments with us.

The rumor that cats can’t learn is a myth. You must teach your cat that you are in charge. The simplest way to make your point with an aggressive cat is to shout “no!” (as we did with Mona Lisa), make a hissing sound, or blow a whistle, thus startling the cat at exactly the moment he starts biting or scratching. Then, move away from him.

One simple trick that works well is to drop 10 pennies in an empty soda can and give it a good shake when you want to startle, but not physically touch, your cat. Another harmless approach is to take a well-timed, careful shot at the cat with a water pistol to startle, but not injure, him. With any of these techniques, he will get the message, loud and clear, and will associate your actions with his unacceptable behavior.

If your cat bites when you’re trying to pet him, remember that some cats who have been poorly socialized can tolerate only a limited amount of physical attention. If you think this might be the case with your kitty, try petting him very gently at first, giving him a food treat after he’s allowed you to stroke him a few times. Gradually increase the number of strokes over time, giving a reward during each session. Bear in mind that cats have distinct personalities, and some simply prefer to keep their distance.

Allowing a cat to bite you does more than just expose you to possible injury; it starts a very bad habit. Be firm for as long as it takes. Good, people-friendly behavior, once established, should last a lifetime.

Cats seem to go on the principle that it never does any harm to ask for what you want.—Petninjas