The Orange Tree at Leicester - Mangihin.com

Whenever I go to Leicester I always contemplate the choice of places I will have to dine; there’s such variety and diversity it’s very hard to choose where to go. If I fancy a cocktail then I will almost always head straight for one of The Orange Tree bars. When I was up there most recently I thought I’d best give the menu a perusal, it would be rude not to. 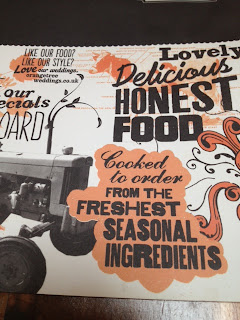 The Orange Tree on the High Street seems to be where Life on Mars meets Bargain Hunt; an interesting place for the eyes to fall on anything from an old telephone sign to local art on the walls. None of the tables or chairs match, in the best way, and the lighting is such that everyone looks slightly yellow and romantic at the same time. Next to our table was a sign advertising the names of the local suppliers and farms used in their food, something they are clearly proud of. Full support is given to Hugh’s Fish Fight for all the fish on their menu. There is always a different cocktail of the week, soup of the day, pie of the week and several specials to choose from coarsely scribed on the blackboard. 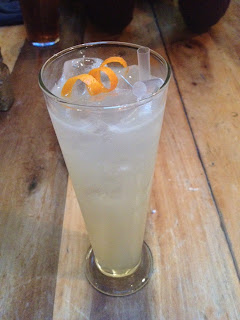 To drink I settled for an Apple and Elderflower Collins: Beefeater gin, St Germain elderflower liqueur & lime juice, shaken with pressed apple juice, topped with a dash of soda. I do adore elderflower and the flavour wasn’t lost in this long drink which was smooth and tangy at the same time, a lovely taste combination. 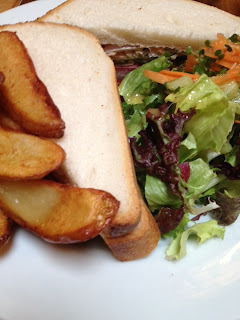 What to eat was a much harder decision; I wanted to have pretty much all of it. The menu had one of the only fish pies I’ve seen that didn’t have shellfish in (I’m allergic to those pesky shellfish), an amazing sounding fish finger sandwich with homemade tartare sauce, a meat antipasti board, a falafel burger and a slow roasted pork shoulder sandwich which were all contenders but I settled for the Brooklyn New York Deli Sandwich.
It was huge in volume and huge in flavour; sliced turkey, salami, gherkins, Emmental and fennel coleslaw in a doorstep sandwich with chunky chips and a massive salad. It was the sandwich I have been looking for all my life and one that I will be trying to recreate at home. The sandwiches were filled to all corners not all fat in the middle and bread at the edges. The chips were wonderfully sweet, almost like they’d baked the potato before deep frying. 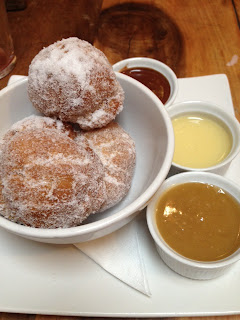 I knew I had to save room for a sweet as I had seen the puddings on the wall: homemade doughnuts with toffee, white chocolate and milk chocolate dipping sauces. The doughnuts were great, really simple and just what you expect; doughy, sweet, light and slightly crisp with the dipping sauces they were fantastic. In fact as I write this I am salivating a little at the thought of them.
The price for two sandwiches with chips and two desserts (with a free tea or coffee with each pudding) was just shy of £23. Considering the local sourcing and clear passion to deliver on flavour and non-boring food I think that price is bang on. It’s the kind of place where you could sit and watch the world go by, and come in, all day. If you’re lucky enough to be able to get a table that is.