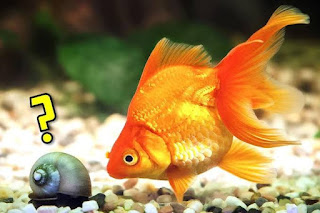 Fishkeeping doesn’t have to be hard if you’re armed with the right information. Unfortunately, there is a lot of misinformation floating around out there. Yes, the aquarium hobby is full of fish stories. So let me debunk a few myths for you.

Myth 1: Fishkeeping is difficult
Ha! Fishkeeping is easy! Fish require little care. It takes maybe 10 seconds (twice per day) to feed your fish, plus a couple of minutes per week for an algae wipe of the glass, and about 10 minutes every week to do a partial water change. That adds up to only about 15 minutes total work per week for the typical aquarium. How hard is that?

Myth 2: Water changes are unnecessary
Regular partial water changes are essential for the well-being of your fish. Water changes remove dissolved waste and replace depleted trace minerals. You may run into fishkeepers who claim that they never change water in their tanks and have no problems. They’re exhibiting selective memory. The next time someone tells you that he doesn’t change the water, ask if he still has all the original fish he bought. Ask if he’s ever had to treat for disease. Ask if any of his fish are several years old. With regular water changes, you should be able to answer yes, no, and yes

Did you know that goldfish can live 25 years?

Myth 3: Mini tanks are a good way to get started
Many newcomers to the hobby buy mini tanks because they are inexpensive. They think that if they are successful with the small, cheap aquarium, they’ll move up to a larger, more difficult tank. The trouble is, they have it all backward. Smaller tanks are harder to keep and are more likely to lead to failure. They provide a less stable environment, making it rougher on the fish. Small tanks tempt you to overcrowd. And, believe it or not, it takes almost exactly as much time to maintain a small tank as it does a large one.

Myth 4: Fish don’t live long
Hanako, a koi who belonged to the emperor of Japan, would be surprised to hear that. He recently died at the ripe old age of 226 years! Obviously, Hanako was an exceptional and pampered fish, but you should be counting the life span of your aquatic friends in years rather than weeks or months. Most small fish—such as tetras, barbs, and live-bearers—should live for three years or more. Larger fish, such as oscars and plecostomus, are good for 10 years or so. Did you know that goldfish can live for 25 years?

Myth 5: Test kits are unnecessary
Test kits are important. When things go wrong, the first thing you should do is run your water tests. You can’t tell the quality of your water by looking at it, so you must test! And no, just because you added dechlorinator drops to your tap water when you set up the aquarium, that doesn’t mean your water was, or will, be perfect in other ways. I recommend that you have pH, ammonia, and nitrite kits on hand.

Myth 6: Fish growth is limited by the size of the tank
First off, all fish have natural size limits based on their species. You’ll never see a foot-long guppy, no matter how big its tank. Fish do tend to grow larger in big tanks than in small tanks, but not because of the size of the tank. Rather, pollution is the limiting factor, and larger tanks tend to be less polluted. An oscar can grow to more than a foot long in a large tank; in a small tank, its system is overpowered by the accumulation of its own waste, and its growth will be stunted.

Myth 7: Plants are hard to keep

Wrong again. Plants can be very easy to keep and can grow lushly. However, they require intense light for photosynthesis. For every gallon of water in your tank, you’ll need 3 to 5 watts of light. Unfortunately, the standard lighting systems that come with aquariums are well below that level, which brings us to our next myth. 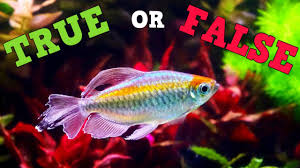 Myth 8: A full hood provides enough light for an aquarium

Myth 9: Iodized salt kills fish
Many freshwater hobbyists keep some aquarium salt in their aquariums—usually a teaspoon per gallon—as a tonic to help prevent disease. Indeed, some fish (such as mollies and other live-bearers) are much happier with a little salt in the water. Aquarium books and dealers will often mistakenly warn that table salt (which has iodine added) is unsafe and that only “uniodized” aquarium salt or kosher salt should be used. Nonsense. This is a myth that has been passed on for so long that it won’t go away. Your table salt is perfectly safe. The iodine level is too low to be harmful; it may even be helpful.

Myth 10: My dealer wouldn’t sell it if I couldn’t keep it alive
Unfortunately, this is not always true. Sometimes, terrestrial plants are sold as aquatic plants. They’ll live underwater a while, but then they’ll die. There are many marine fish and invertebrates who require specialized diets that are impossible to provide in captivity. Yet dealers commonly sell them to the unsuspecting consumer. There are also many species that can be kept in captivity only by the advanced hobbyist. Learn about any plants or animals before you buy them