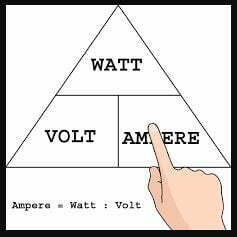 Are Volt amperes the same as watts? What is the difference between Watt and VA? let’s understand both.

Greetings, technicians, before I apologize, because getting here, day after day week after week month after month the discussion will be more advanced and harder for novice readers to digest, including that too. The more here, the friend will be increasingly encouraged to understand how to distinguish, calculate formulas and more in-depth electrical activity.

What is the difference between Watt and Volt Amperes.

Sometimes, there are still debates that are difficult to explain about VA and watts. Is VA the same as watts? If the same, why are the names different? If it’s different, why is it written as VA as the formula for finding watts only! And many other puzzling questions.

Why is it different?

Indeed, VA and watts are electric power. But once again we have to know why it’s called VA and why it’s called Watt. VA is a unit that shows the power capacity that can be accommodated in a series.

So if we are diligent in paying attention to the details of the power in an electrical component, we will understand the difference between VA and watts. VA is usually used in protection components (circuit breakers), and current supply (batteries or KWH), electric charge storage (batteries), or other components that are not in charge of converting electrical energy into other energy. That is, the folded component redistributes electrical energy.

Talking about VA and watts, we will not be separated from the discussion about apparent power, reactive power, and a real power. So we discuss a little about the three types of electric power to better understand the difference between VA and watts.

We use the image above before as an example

What is reactive power?

Reactive power is the power that is absorbed by inductive electrical equipment. This inductive vacuum is identical to electrical equipment that has components in the form of winding, for example, Heater heating elements in dispensers and rice cookers, compressor motors in air conditioners and refrigerators, ballasts in lamps, electronic components on televisions, and others.

From now on, there is nothing wrong with being forced to know about reactive power because it cannot be separated. When you want to understand the difference between VA and watt, we must understand Reactive power.

A simple example of using VA and watts

Let’s take the most common example, namely the use of VA in KWH as a contract between PLN and the consumer. We can analogize a holding container. This means that the consumer’s electricity consumption with a contracted power capacity is the size of the container.

If the water exceeds the capacity of the container, there will be water spills. In this actual incident what causes the MCB in KWH to “jiggle” or in its electrical language “Trip”.

That’s a little explanation about the difference between VA and Watt. The same unit of electric power but different functions. It’s that simple. Hopefully, this can be useful and can add to your knowledge. We apologize if there is an error in the delivery.